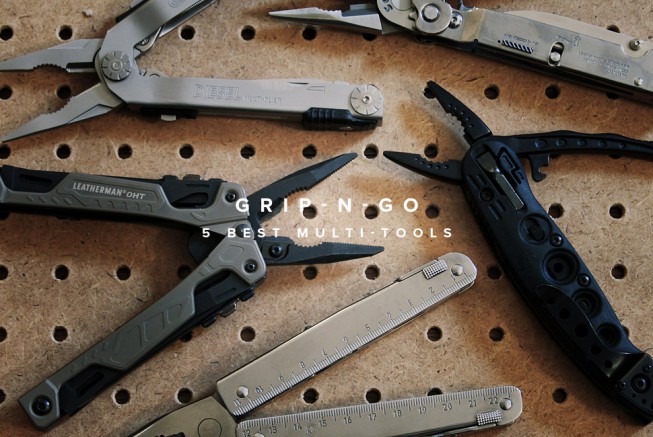 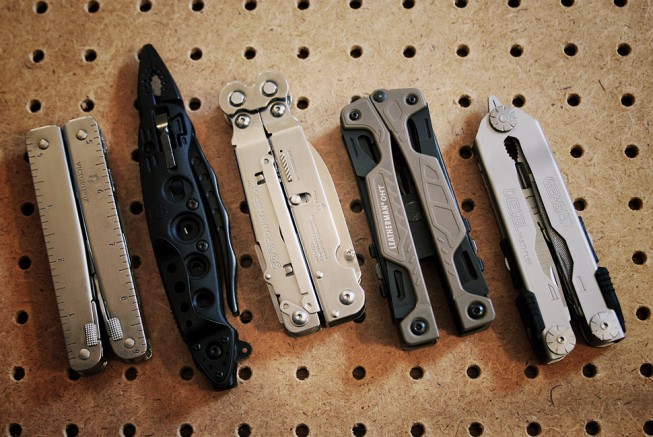 Let’s face it, you’re most likely not one of those guys who has every tool for every job. Caught yourself trying to pry something open with a pen or a fork lately? We’d say you’re in the market for a handy all-in-one multi-tool. Sure, it won’t come close to fixing everything, but in a pinch, it’s a great “go-to” instrument that could make a difference (especially if your tool kit comes from the local pharmacy).

Multi-tools have been completing odd jobs since the original Leatherman PST (Pocket Survival tool)came out in 1983. As good as the PST was, multi-tools (or multi-pliers) have come a long way since then, today varying in size, tool type and count. Some are even specialized for gunsmiths and electricians. In our quest to find the best, though, we also discovered that many manufacturers have abandoned their multi-tool production due to poor sales. We call it “thinning the herd”, and it’s actually for the better, as the ones that survive tend to be the most user-friendly and the hardiest. Ready to become a Renaissance handyman of honey-do lists? Read on for five of the best full-sized multi-tools on the market today. 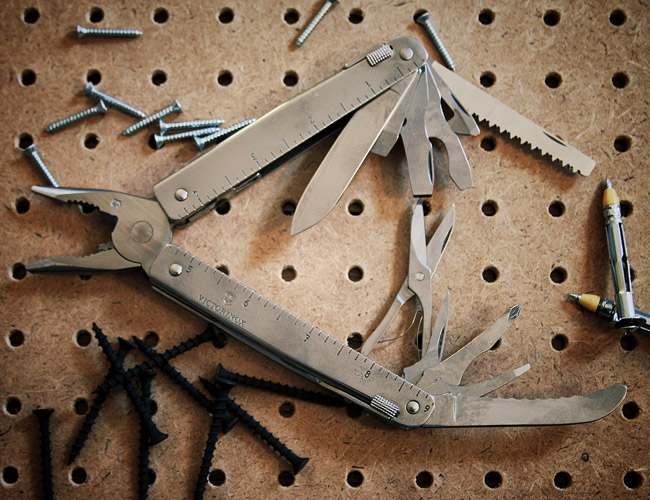 The Bombproof Multi-Tool: The Victorinox looks like you could run it over with a tank without breaking it. The original SwissTool has been around for over a decade, and we’re glad to see it hasn’t changed much except for some minor model variations — the RS being one of them. Its slightly blunt-nosed pliers remain completely concealed until you unfold the handles, which double as a nifty 230mm/nine-inch ruler when aligned. And though the pliers aren’t spring-loaded, you can crank down on them hard without the SwissTool losing its comfortable feel. All of the folding tools (a whopping 24 in total) are held securely in place by a flap-type spring and lock when fully deployed. The SwissTool carries a lifetime warranty, but you’ll probably never need it. 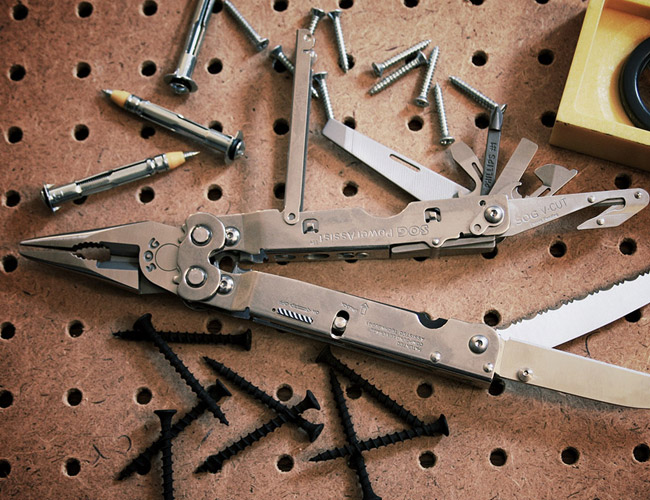 The Quick-Draw Multi-Tool: SOG has been making great knives since 1986, and the full breadth of their technology makes its way to the SOG PowerAssist multi-tool. Two large blades (serrated and straight-edge) can be deployed with SOG Assisted Technology: Use the thumb peg to open the blades and the patented compound leverage device completes the opening process and locks the blades into place. Easy. On the other hand, when the extremely sharp blades are not in use, they lock in place via safety switches — so you won’t shank yourself while doing a dive roll to get to that loose screw.

The excellent needle-nose pliers add precision and grip well despite the lack of a spring-loaded release. They conceal completely when the handles are closed, just like the Victorinox. The other folding tools, including a patented V-Cut blade, are concealed by a hinged cover, which provides a more comfortable grip when using the pliers but adds an extra step to open (it’s worth it). The SOG’s also easily the best-looking multi-tool in this group, if that’s your thing. At least you’ll look professional. 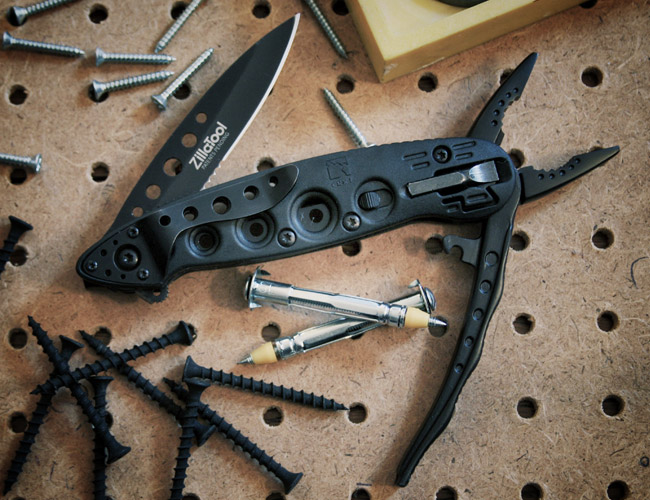 The Dare-to-be-Different Multi-Tool: This is the black sheep of this group, in that it looks like nothing else here and comes in full stealth regalia. Definitely the most unique design out of the five, the Zilla-Tool doesn’t try to be all things to all people. It goes for the basics and does them well. The slight needle-nose pliers are deployed by a switch in the middle of the body, which releases the spring-loaded handle. The body itself acts as the other handle, providing good grip strength. The large straight-edge blade unfolds using a convenient flipper that engages quickly and acts as a blade guard when cutting. At the opposite end of the pliers, a hex tool holds the hex screwdriver bits stored in the handle, which will also accept other standard hex bits. In addition to having a nylon belt holster, this is the only multi-tool that comes with a built-in pocket clip. The Zilla is big, though, so don’t slide these suckers into your skinny jeans. 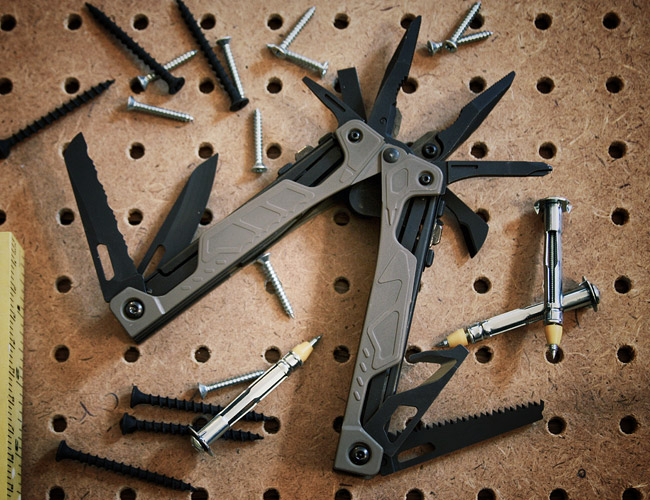 The Innovative Multi-Tool: Look at the full range of their multitools and you’ll see that Leatherman keeps innovating. OHT stands for “One Handed Tool”, a moniker that’s appropriate here. Its unique design allows one-handed deployment of all 16 of its tools. The retractable pliers open with a quick flick of the wrist, are long and precise, and have a great spring-loaded release. There’s also a simple feature that’s genius: each of the tools is easily identifiable via visual imprints on the handle, removing guesswork from the equation. It even comes with a strap cutter and an oxygen bottle wrench. In desert tan, the OHT also has the military look down pat. Though it might not be the implement of choice to defuse a bomb, it certainly looks the part. 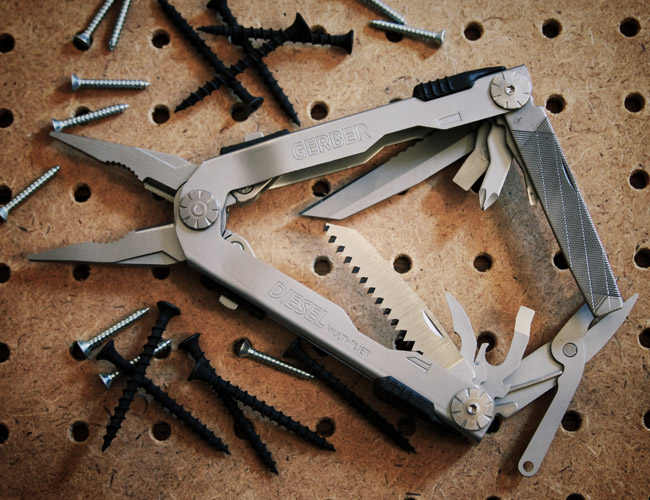 The Evolutionary Multi-Tool: With a total of twelve tools, including a serious saw blade and a great pair of scissors, the stainless steel diesel is well-appointed and very sturdy, with very similar styling and operation as their original version. Wrist-flick pliers on the Diesel work just like the ones on the Leatherman OHT with action that’s just as smooth. The needle-nose pliers are thin and fit just about anywhere you need grip; even though they aren’t spring-loaded, release just takes a finger. The sliding tool locks are strong and secure but can be tough to disengage with gloves or sweaty bare hands. We like the bead-blasted type finish that doesn’t attract fingerprints like theHousewives of —– County series attract botched plastic surgery jobs.