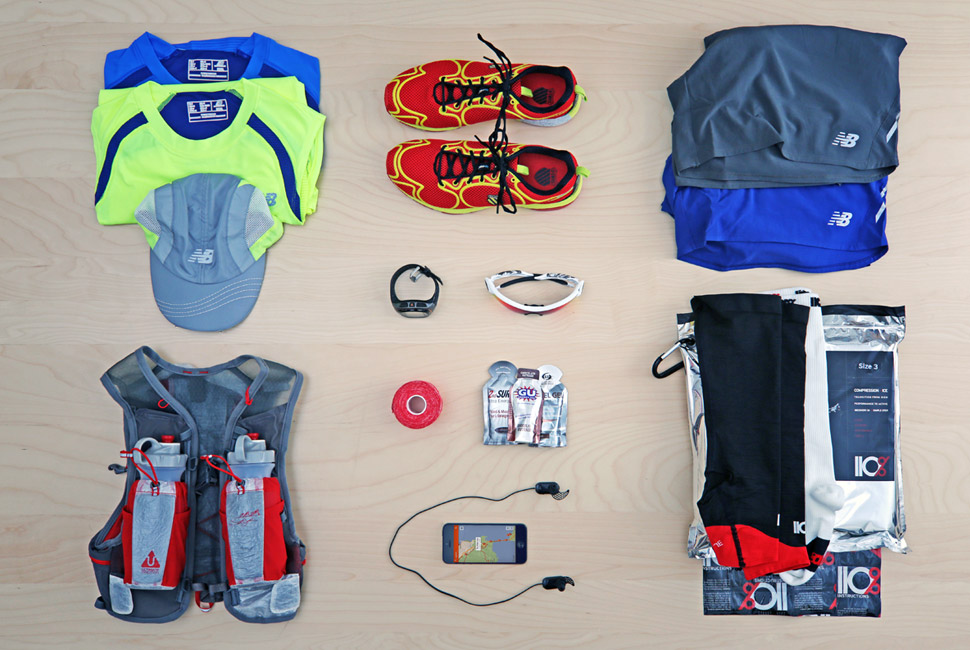 Warm weather: we can’t say enough good things about it. There’s something noble about putting on cold weather gear and sticking it out all winter, but running in the summer, sweat pouring off your brow, hat and clothing looking like the Bonneville salt flats, the first sip of HEED after 20 miles in the scorching heat, runner babes in short shorts — this is pure, unadulterated sport pleasure. Here’s the gear we’re wearing. If you’re prepping for a race or just like to hit the pavement for an hour after work, this stuff has performance written all over it. So go forth and perform. And don’t forget the sunscreen.

Read the full details for each item on the next page. 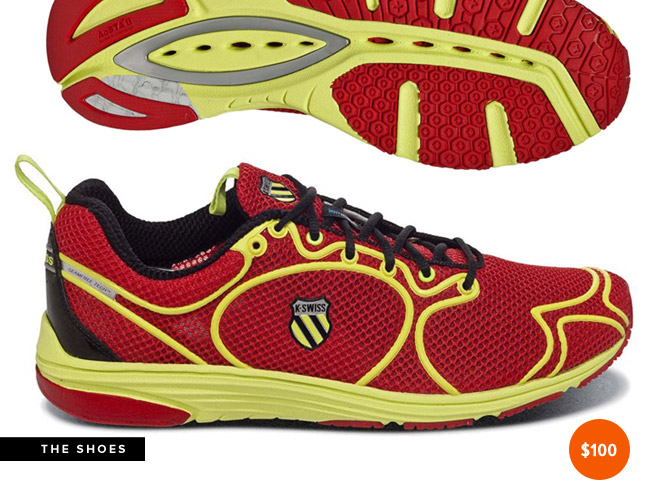 So much debate. Traditional versus minimalist, stack height and drop, pronation. We love minimalist, but the truth is that even during the reign of the ungainly cross-trainer there’s always been a minimalist option: the racing flat. By definition, it’s a simple, very lightweight shoe that provides speed and unobtrusiveness over structure and support. The K-Ruuz 1.5 is just such a shoe, weighing in at 5.5 ounces, with roughly 10mm of heel-toe drop, a seamless and super-breathable upper and an ion-mask protective layer that sheds water and dirt. Triathletes will like them because they’re comfortable sockless and have drainage holes in the bottom. 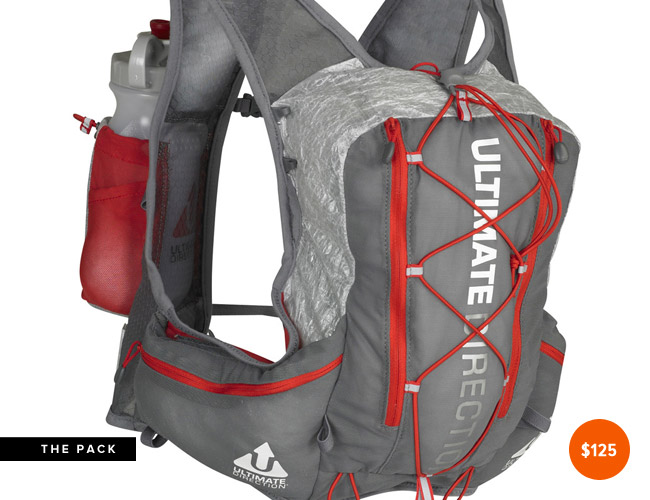 The question of carrying a pack is a no-brainer for most runners: they choose not to. Many are bulky, uncomfortable over time, or cause you to overheat. Packs for runners are getting frighteningly good, though, and the Scott Jurek Ultra Vest from Ultimate Direction is at the top of the heap. The fit is close and contoured like a vest, rather than a traditional pack — so no banging around, which is impressive considering it has a total of 12 pockets, pouches and compartments. Each of these storage options is well thought out for a variety of purposes (keys, gels, phone, etc.). The vest is made mostly of super-strong Cuben Fiber and hex mesh, so it’s durable and breathable.

Two 20-ounce bottles sit on your chest for easy access to drink, refill and mix nutrition. There’s also an emergency whistle in case you bonk out of an ultra trail run at mile 40 and need someone to drag you out of the woods. 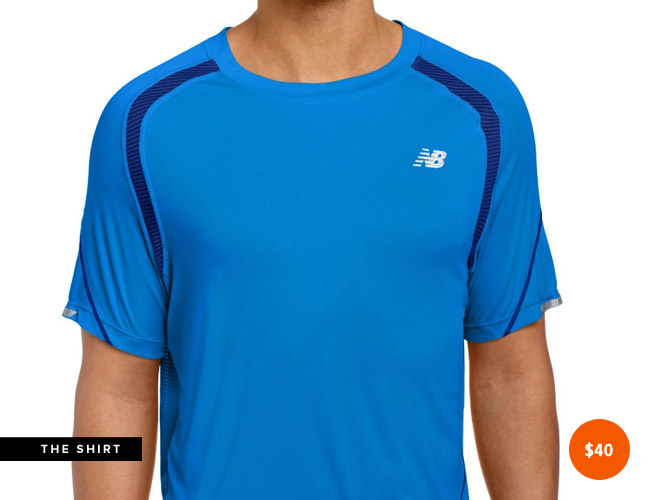 A classic shirt from New Balance that’s 100% poly and uses NB ICE technology, an application of Nano Jade Powder that’s supposed to release heat efficiently and cool the surface temperature of the skin by two degrees. Plus, it provides UV protection. Typically we go in a split short with as little fabric as possible, but the 2-in-1 brings something extra to the table: an inner compression short that basically solves the problem of chafing caused by most mesh inner briefs. The fabric is also moisture wicking. 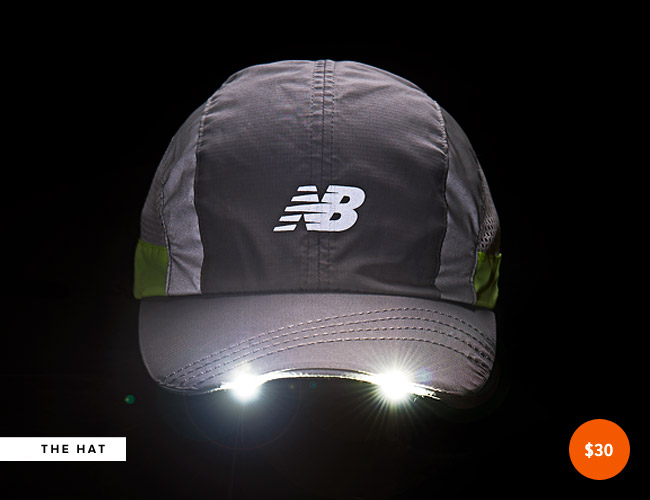 We debated including a headlamp here, but decided against it (keep an eye out for a mountain running kit soon). Runners looking to hit root-covered trails at night should consider the Petzl Tikka XP or the Black Diamond Sprinter. But for those just looking to cast some extra light on the road around dawn or dusk without looking like a spelunker, the Tri-Viz cap has four bright LEDs, activated by a button under the brim, with 30 hours of battery life. Flip it around backwards to blind other joggers as you dust them. 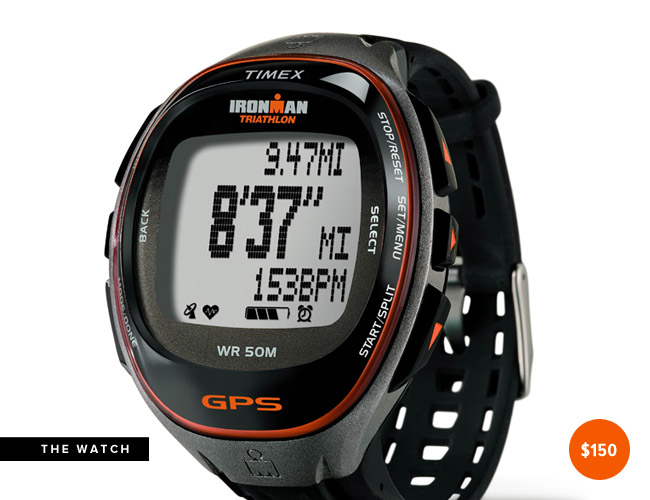 Looking to transition from casual jogging to serious training? Then it’s time to start collecting data: pace, speed, distance and altitude, to start, plus cadence and heart rate if you really want to geek out. The Run Trainer allows you to do all of this (you’ll need a foot pod for cadence, though) using SiRFstarIV GPS and connecting to external devices via ANT+ protocol. Upload this information post-workout to TrainingPeaks to break down your performance and set goals for future runs. There’s also a new version of this watch with the same backbone and a few extra bells and whistles. 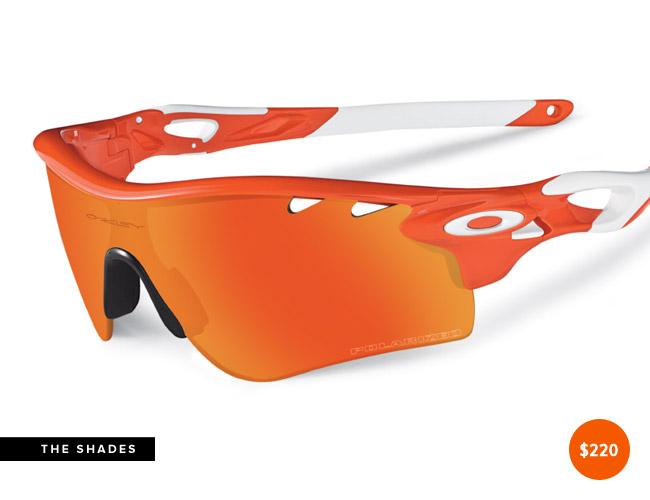 It’s one thing to make fresh-looking shades. It’s another altogether to make sunglasses fit for violating a half marathon under punishing sun with the occasional stray elbow, wind-carried debris or Beech-Nut spit from a passer-by. Oakley makes the latter, and the RadarLock Path is their premium sports-specific setup. It has beastly features: Switchlock Technology that drops the lens out in one fluid motion; durable frames with vents for airflow and a fit system that keeps them glued to your head; and Oakley’s super-high standards for impact, clarity and UV protection. We’ve outfitted these with OO Red Iridium lenses, which are polarized to kill glare and are well-suited for running on pavement in bright conditions. JayBird’s Bluetooth headphones are all specifically designed for sports, and they nail the important little details that runners look for: they’re light, wireless, secure (with different sized ear cushions and fins that lock into your upper ear), easy to control mid-run with on-ear buttons, and sweat-proof. JayBird says that their sound emphasizes sub-bass to avoid listener fatigue. Runners accustomed to a traditional earbud might find them disorienting at first because they really do lock into the ear and eliminate ambient noise. 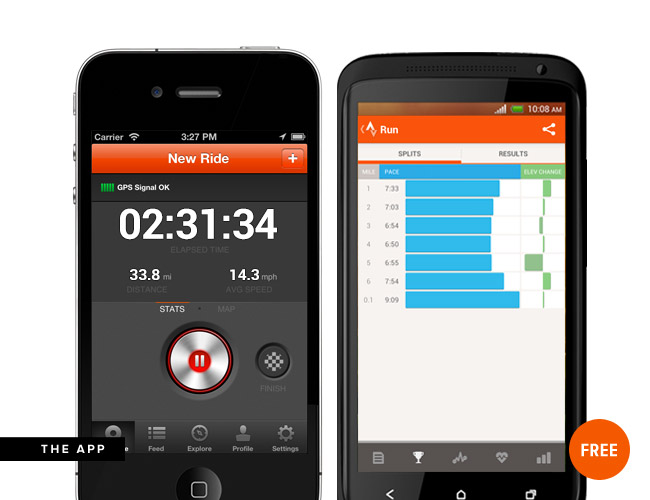 Strava is the app of choice for cyclists, but is perhaps less well known among runners who have lots of other options like RunKeeper, MapMyRun and Nike+. We like it precisely because it works for both disciplines — and because it’s less cutesy than other apps. The free version tracks runs with GPS, lets you compete with other runners on local routes, and helps you visualize your performance in graphs. You can also connect it via Bluetooth or ANT+ to external sensors (e.g., heart rate). The premium version of Stava is fairly expensive ($6/month), but allows you to set and track goals and provides a much more granular analysis of your performance. 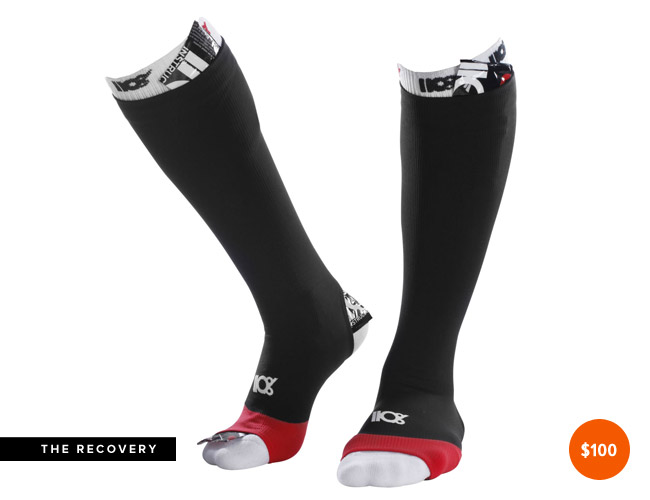 Before we talk long socks, let’s set the ground rules: Thou shalt not wear compression socks while jogging. Thou shalt not parade about in them to show off. And, for good measure, thou shalt not wear them when you’re otherwise naked. Maybe. These are a recovery tool, for when you’ve put your lower extremities through the ringer and want to boost circulation and muscle repair. This kit from 110% is the boss, including compression socks outfitted with sleeves around the target areas (calf, shin, ankle, foot), reusable and customizable (by cutting) ice inserts to put in those sleeves, and a thermal bag to keep the ice inserts frozen for six hours — long enough for most races, unless you’re doing Ironman, in which case, pack them in a cooler with beer. 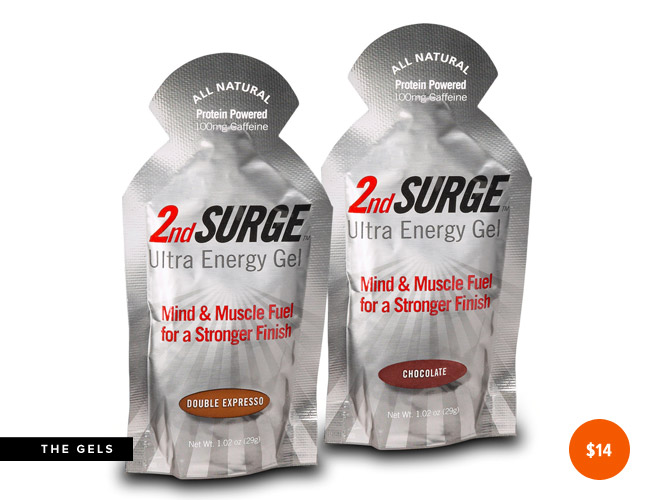 In general there seems to be a popular shift among runners away from engineered nutrition supplements to natural snacks: dates, bananas, homemade energy bars. We’re all for it, but if your little baggie of chia seeds gets a tear at mile 15 good luck collecting them off the hot pavement. We’re known to pack a few caffeinated, chocolate-flavored gels on long runs. 2nd Surge is the best, texture-wise, because it’s closer to a liquid than a gel and only requires sip of water to slug back. 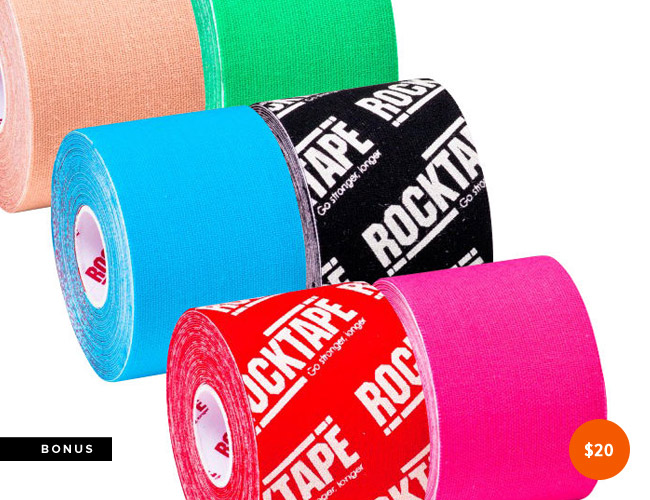 You’ve got the cap with lights, the compression socks, maybe even the running parachute — but your desire for gear is insatiable. RockTape is a brand of kinesiology tape, essentially a stretchy cotton and nylon athletic tape with a bias in the weave so it stretches only in one direction. The purpose of this is two-pronged: (1) to support muscle groups, e.g., the neck while tucked in the aero position on a bike, and (2) to speed recovery by lifting the skin away from soft tissue and increasing blood flow. Does it work? Depends who you ask, but we’ve been known to cover a tender Achilles in the stuff.